Balling our Fists and Laughing Out Loud: Myanmar’s Spring 2021

People roared from their balconies into the night as an episode of flashes and bangs paused.

It was the night of March 7, 2021. Surely too late for the Gregorian new year and still too early for the Burmese new year in April.

The people, however, were not yelling out of celebration but out of bitterness and mockery. The flash and bangs were not fireworks. They were bullets and sound bombs. The people were at their balconies because it was well past the nationwide 8pm curfew. Anyone out after that time can be detained, tortured, and/or executed.

This ironic “Happy New Year” night of Yangon is one of the most powerful moments during Myanmar’s Spring Revolution. There have been many moments like this since the beginning of the coup on February 1 where the military’s blunt terror is countered and rendered pathetic by the Burmese people’s united resilience and tasteful sense of humor.

The power of humor during Myanmar’s Spring Revolution—and in Burmese socio-culture in general—should not be taken lightly. Humor or “Ha-tha” (ဟဿရသ) is one of the 9 types of Tastes in classical Burmese literature. Hence, humor is considered on par with other types of tastes such as feelings of love, peace, disgust, and fear. Being able to laugh at the soldiers with guns during the nation’s darkest times proves that laughter has the power to repel fear, and such a resilient display of humor has effectively dismantled the terrorist coup-makers’ validity.

It is quite difficult for an outsider to grasp the full extent of Burmese humor as the punchline is usually embedded within layers and layers of Burmese linguistic and cultural context. Hence, the humor is subtle and is communicated as somewhat of an inside joke. One of such examples is “Ma-Aa-La” (မ အ လ).

This is arguably the starting point of the kind of Burmese humor that powered towards a revolution of such intensity. The three letters are the initials that make “Min Aung Hlaing” (မင်းအောင်လှိုင်) but the punchline is that those three letters in that order can also be used to spell “Ma-Aay Loe” (မအေလိုး), meaning “Motherfucker.”

Since day one of the coup, anyone who is anti-coup has been saying “Ma-Aay-Loe, Min Aung Hlaing” or just simply “Ma-Aa-La”. This simple and natural interchanging of the dictator’s name to a humiliating curse word essentially nullified the power of the tyrant to a mere mockery.

The Burmese people’s natural tendency to humor is further amplified with the arrival of social media and meme-culture in the 2010s. Hence, the present-day youths (Generation-Z/GenZ) have the best handle of the current trends of humor.

Growing up in an era of online games, anime and K-pop, GenZ incorporates all these elements into the already definite culture of Burmese humor. This new sense of humor and exposure to other cultures enabled GenZ to resist and reject the coup in completely different ways from all other previous uprisings such as 1988 and Saffron Revolution (2007).

As the revolution progressed a massive generation gap between the older and the younger generation in Myanmar became more obvious.

To the older generation, the “young ones these days” do not have any staple life-skills and are wasting away their time online.

To the younger generation, the older generation is just a ridiculous bunch of close-minded people.

A screenshot of a text describing the protest at Hledan, Yangon on February 10, was widely shared: “Let me tell you what happened at Innya Road today. The protesters marched. Then the police came. They drew lines and stuff. Did complex formations. Even the water cannon car arrived. Then, someone from the very front of the protest asked them, ‘Hey, Bro! You done? Then, see you tomorrow!’ And, the entire group of protesters turned back and went home!”

The older generation thought such tactics of avoiding direct confrontation with the military to be ingenious and applauded GenZ for minimizing casualties as much as possible. Little did they realize that this GenZ instinct of avoiding trouble has existed for a long time. Such behaviors only became more visible due to the revolution.

In addition to growing up in a budding digital age, the parent generation of GenZs—surviving under a 60-yearlong dictatorship—is hyper protective. The culture of fear, surveillance and censorship of the state has extended to the home as parents out of fear for the military’s brutal punishments, made sure their family stay of out trouble.

Hence, GenZ not only had to survive surveillance of the state at schools and institutions but also survive the surveillance system at home. This unconsciously nurtured culture of avoiding confrontation and introverted behavior combined with the online and global entertainment trends made GenZ unpredictable to the older generation, including the military. 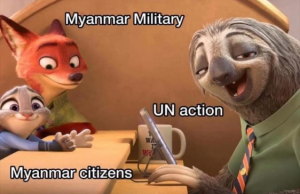 To name a few of GenZ’s masterpieces:

Car protests were held where vehicles on the road mysteriously “break down” blocking all traffic. In front of the Japanese Embassy, a cosplayer held a sign “Military-Kun, Yamete Kudasai!” (Military, please stop!)

When suspicious planes from China arrivedduring the internet blackouts and the Chinese Embassy’s response was that those planes were seafood cargo, GenZ put a large sign in front of the embassy: “SEAFOOD MARKET”.

When the United Nations’ actions were slow, social media memes went around: “I should put the old people from my family in UN meetings too so that they can all be ‘deeply concerned’ together.”

Decades of hiding their true dreams and identities in order to stay out of trouble; decades of adjusting their young lives to survive in the adults’ unfair game—with the Spring Revolution, GenZ is now saying enough is enough.

This article was written during the very early months of the coup and was originally published in UNLIRICE: Domains magazine. As of August 2021, the state-sponsored violence has accumulated over 1000 deaths and 5500 detained. The number still does not include over 20,000 killed indirectly by the military’s inaction towards the ongoing pandemic as well as thousands of internally displaced people due to the escalating violence. Amongst the deaths are artists, poets, writers and visionaries whose legacies deserve much better exits, and whose lives could have been spared under normal circumstances. Despite these tragedies, the resilient humor lives on.

This text is part of မိုးသောက် — a series of posts edited by Nathalie Johnston and arranged by Myanmar Art Resource Center and Archive (MARCA).

မိုးသောက် or ‘moethauk’ literally translates to ‘drink of rain’ but is used in the Burmese language to refer to the early morning or dawn. The participating scholars in this section of the blog are from Myanmar and chose this name to reference a new beginning, starting over in the wake of the damage caused by Covid-19 and the recent military coup in Myanmar.

Diana Zaw Win (pseudonym) studied Art History, Theory and Criticism at the School of the Art Institute of Chicago (Class of 2020). Upon returning to her home country, Myanmar, she found herself surviving under a brutal military coup.